A Tribute to Hostess 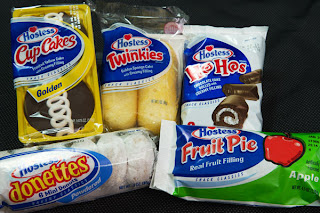 Last week's "sugar rush" roller coaster - Hostess announcing its end, then going into last minute talks of negotiations with the unions, then deciding to shut it down again - left America simultaneously weeping and rushing to the stores to buy up the last few wrapped baked goodies that most of us grew up eating.  As many of you know, I gave up eating foods with flour and sugar over 5 years ago, so I have not touched a Hostess treat in that time.  However, once upon a time . . .

So, in celebration of being Thankful, here is Funkyman's top 10 list of Hostess treats, in order, and why.  Enjoy!


10.  Sno Balls - These were cream-filled cupcakes smothered in marshmallow and covered in pink coconut.  Very tasty, though very messy with the coconut.  The cupcake for some reason could easily dry out, making the experience a downer, but if you were fortunate enough to get a fresh pack - WIN.

9.  Chocodiles - How many remember the jingle - "It takes a while to eat a Chocodile!"?  How many were kids like me saying, "Um . . . it takes 2 seconds to eat a Chocodile."  What's a Chocodile you ask?  Chocolate-covered Twinkie.  How could that concept go wrong right?  As tasty as they were, everyone preferred the original, though pretty much anything dipped in chocolate is a win.

8.  Ding Dongs - The only reasons Chocodiles and Ding Dongs are so far down on the list is because they were variations on something even better.  But, do not get me wrong.  I LOVED DING DONGS.  They are basically chocolate covered cupcakes.  However, as much as I loved these cakes, I preferred their distant cousin even better.  Sorry Hostess, in the fight between snack cakes - RING DINGS RULED.  Ring Dings were slightly smaller but tastier versions of DIng Dongs, made by the baking company Drake's, which would be later bought and owned by Hostess.  I could eat Ring Dings all day every day . . . and there was a time when . . .

7.  Honeybuns - OK, if you didn't see this coming, you don't know Hostess.  Those little Iced Honey Buns are the crack cakes of legend.  Remember when they came out with the Glazed version?  Iced was always better - pure sugar rush deliciousness.  Man, it's making me nostalgic thinking about it.

6.  Ho-Ho's - So the Drake's vs. Hostess battle was a popular topic 20 years ago.  One of the most famous was Ho-Ho's vs. Yodels - both chocolate cake swiss roll style with creamy filling and then dipped completely in chocolate.  I knew die hard Yodels fans, but Ho-Ho's hung in there.  The great thing about Ho-Ho's was that they were small and made you FEEL like they weren't so bad.  Definitely smaller than . . .

5.  Suzy Q's - Man, who thought of this?  I don't know but I ate a lot of them.  Moist chocolate cake sandwiches with that wonderful Hostess creme filling as the main event.  They were messy.  They were huge.  As opposed to a Ho-Ho, you KNEW eating a Suzy Q was wrong.  And it was awesome.

4.  Donettes - In the "smaller is less egregious" category - here come the mini-donuts.  For some reason, the Powdered Donettes were my favorite - they had a smooth, sweet delivery and were so addictive, you could easily eat 10 without blinking.  The worst was when someone would by a bag or large box of these, and you start counting to yourself - "OK, there are usually 6 in a pack, so one more is not too bad . . . "  The chocolate ones were amazing too.  6 to a pack?  WIN.

3.  Cupcakes - Alright, top 3 here we go.  Today, cupcakes are multi-million dollar industry.  Cupcakes come in every size, style, and flavor.  However, whenever someone says the word "cupcakes," I think of these.  Chocolate covered chocolate cupcakes.  WIN.  The squiggly white signature on top is classic and almost synonomous with Hostess.  When I see the Little Debbie "imposters", I get angry (though they have many tasty treats as well).  Did anyone ever eat the orange ones?

2.  Fruit Pies - While this may come as a surprise to some, fruit pies were my favorite.  I know some didn't care for them, but for those of you who loved them, you feel me?  The Lemon Pie - outrageous.  The Apple Pie - perfection.  The Cherry Pie - . . . BLISS.  I ate more pies than I should have, I admit.  But that's what this drug does to you.  It's a horrible addiction!  Which brings us to number 1 - duh.

1.  Twinkies - While fruit pies were my favorite, the TRUTH is that Twinkies are the greatest contribution to snack food pastries in the history of America.  For the sheer fact that they stayed edible on the shelf FOREVER alone, they deserve this distinction - though I would have highly encouraged you to eat by the date on the box for maximum enjoyment.  I really don't know what it was (WOW, I just said "was" - it's really over!) about the Twinkie that made it so perfect, but there was something different about the moist, spongey cake.  Yes, we all loved the creme filling, but that cake was special - ESPECIALLY the BOTTOMS - real Twinkie enthusiasts will agree.  Didn't you hate when the bottom of the cake STUCK to the cardboard?  FAIL!  Real Twinkie addicts KNEW that you needed to buy them in bulk, individually wrapped, to avoid this disaster.  Then, you could eat one Twinkie at a time and play the "I'm only eating one Twinkie" game with yourself - even though, you just inhaled 4.  And once upon a time, Twinkies came 3 to a pack - does anyone remember that?

Will anyone remember Hostess in 25 years?  Those of us who grew up eating these products will, though our children will forget.  I will close by saying there was never a doubt in my mind my entire life that Hostess had the monopoly on being the best.  They just were.

And now . . . it's over.  Though I stopped eating treats like this years ago, I'm sad to see such a major part of my eating experience gone from the shelves forever.  Little Debbie - are you happy now?  It's your world now.  Go and enslave millions more flour and sugar junkies.  America, enjoy those Oatmeal Creme Pies (so good!) and Nutty Bars.  You'll have to do it without your diabetic but slimmer & medication free

Mumbles said...
This comment has been removed by the author.
1:27 AM

Sometimes I feel I'mI the only person who noticed that the quality of Twinkies dipped over the last few years. The cake became more grainy and dry, less spongy and moist. It actually turned me off Twinkies, though we did buy a couple boxes and chow down there at the end.

Sessler additionally backed as the manager in chief related to G4's gambling articles. They will staying your area last Apr after a 14 year payback occasion."It should be incredible understatement to express the instant conclude associated with the expertise that's section of my well being for 18 many years ended up impressive,Inch mentioned Sessler in a publish expressing his brand new home.
Fifa 14 coins