The Jesus is the Man Project - The Complete Story 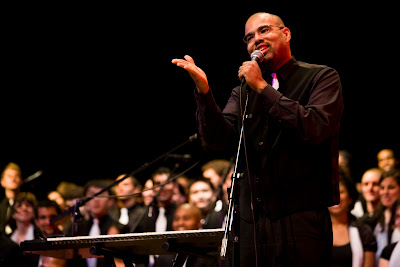 It has been a long time.  Actually the LONGEST time I've ever spent away from updating TAOF since we began this party in 2006.  My sincerest apologies, however, my time was quite consumed with a project that all of you know about if you know me.

Funkyman:  "No, and aren't he and Doug Henning really the same person?  You've NEVER seen them in the same place twice.  I'm just saying."

Funkyman:  "No and no, but your last answer is getting closer!"

Funkyman:  "What?  Ludacris is not a magician.  I meant the Angel part."

Funkyman:  "OK, I'll let you off the hook.  Tell them Funkyworld - THE JESUS IS THE MAN PROJECT!!!!"

When I was in my sophomore year of college at Boston University in 1989, I had just switched from being a piano major to being a composition major.  I had been obsessed in my freshman year with songwriting (about a girl - what else?) and finished the year by writing a full four-movement string quartet.  I had also begun working as a part-time musician at MIT for their student gospel choir, AND I was working on Sunday mornings as a musician at St. Paul A.M.E. church.  I was 18 years old.

Until that year, while I was living in Boston away from home, I had not been in church every Sunday (another story for another day - the Confirmation story).  Playing contemporary gospel music with my peers became something I was very fond of.  However, even with all of these new experiences of composition and a new church, I had yet to venture out and write a gospel song.

And then I did.

The first gospel song I ever wrote was called "He's the Way." The lyrics went like . . .

I thought I was lost.  I could not find my way.
I did not know what to do.
But then I found the Lord and found salvation
and now I'm telling you.

He's right by your side, all day and night
You don't have to be afraid.
And when you've found the Lord
You'll know that He's the way.


Deep down, I kind of knew it sounded corny, but it was my song, and I liked it.  Of course, the real test would be playing it for someone else and getting a second opinion - which if you've ever created anything, you know is a risk.  However, I wanted some insurance on my risk, so I decided to play the song for a friend from church who knew a lot about gospel music, and I purposely did NOT tell him that I was the author.  This is what happened . . .


I knew that day that I was NOT supposed to be writing gospel music.  I finished the remaining four years of college playing in church and writing a lot of music, but never another gospel song.  I wrote what many would call Classical Music for many instrumentations, and when I wrote pop songs, they were generally about relationships - usually my own friendships, other people's romantic relationships, and my lack of one.  One of my favorite songs was called "Mirage."  (actually track 8 on The Adventures of Funkyman CD)  It was about patiently waiting for that special person to come into my life.  How ironic it was that this song about waiting for someone special would be the turning point in this story about Jesus is the Man.

I continued to play piano in churches throughout college and as I finished BU, I got the opportunity to be the director of the Boston University Gospel Choir.  Their previous director had often written original songs for them to sing, and one day it happened . . .


Student:  "David do you write songs?"


They were so encouraging.  So, in order to calm my insecurities, I decided to take two things I knew that worked and mash them together - the music of "Mirage" and the lyrics to an already loved hymn in the church - "By and By" - which ironically is a song about patiently waiting.   I loved the lyrics and meaning of the hymn, and the music for the song was my heart on a plate.  It was the first performed "David Coleman" gospel choir song, and it was very different.  While I was very sure this song represented me, I wasn't sure if people would consider it good gospel music.  Every year, the choir went on a February tour, and it was in a church in Delaware where my first gospel song was sung.   However, we sang that song EVERYWHERE that 1st year - by request, and it helped me to see that people don't just respond to good music, they respond to honest music.

After the success of that 1st year, I had the fire inside to write more.  This time, I wanted to write my own lyrics.  I just needed an original idea for a song . . .  and then it came to me . . .

Jesus is the Man

I continue to be astounded by how little people actually know about the man Jesus of Nazareth.  "Jesus" and "Christians" are words that everyone knows, but often with very polarizing opinions about what they imply.  It is my perspective that regardless of one's ignorance or another one's difference of beliefs, education is the key to peace.  We fear what we don't understand, and we hate what we fear.  I had this crazy idea of writing a song that introduces someone to who Jesus was/is/could be to them - and the song was born.

The Boston University Inner Strength Gospel Choir performed "Jesus is the Man" in November of 1994 at our Fall Concert in the Grand Ballroom of the George Sherman Student Union on Commonwealth Avenue.  It was electric and fun, and I thought that was the end of it.
However, I still had songs to write.

Every new school year, I would write 4-5 original songs for Inner Strength.  During the summer before that 2nd year, I began writing lyrics that said . . .


Listen up I've got a story to tell
about a man you may not know so well.
He's what's right in a world that's gone wrong,
and He's why I am singing this song.

Give Him praise above all else.
Get to know Him for yourself
'cause I know who holds my hand . . .


As I wrote the obvious rhyme to that last part - "Jesus is the Man!" - I laughed.  I took the finished song and told the choir "Here's Jesus is the Man 2," which produced a group laugh.


And so it went.  Each year for the choir I would write a new Jesus is the Man song.  I began to use the different kinds of music I heard around me - house, disco, classical, hip-hop, Motown, blues, jazz - and smash them together with original lyrics AND lyrics from traditional hymns.  I found myself quoting unknown motifs from Run D.M.C., The Roots, Leaders of the New School as well as paying homage to Stevie Wonder and Chaka Khan and current gospel artists John P. Kee and Hezekiah Walker.  It was about Gospel.  It was about Funk.  It was about Love.  It was about Him.  It was a great time for BU Gospel Choir, a great time for me personally, and a great way to spread the message about who Jesus is.

Around the time of writing the 8th song, I began to see that these songs belonged together as a large song cycle.  They obviously all had the titles and central figure in common.  And though they each had their own unique musical style, they also shared a common musical language - descending 7-chords.  In the end, there were 10 songs.  I purposefully composed #9 in the same key as #2 and #10 in the same key as #1 to give the effect of closure to the cycle and so that the listener would subconsciously feel the connection between all of the songs.  I called it the Jesus is the Man Project, and it was my mission to record these songs for future generations to experience what we were experiencing.

After finishing our February tour in 2002, I took the musicians (Dre & Nate) to Flux Studios in New York City, (owned by my good friend, Fab) to record four of the Jesus is the Man Songs - 1, 2, 9, and 10.  I took those tracks back to Boston and purchased studio time at Futura Productions.  I then brought my church choir (The New Temple Singers), the BU choir, and my (new) ensemble, Confirmation in to record the vocals for those four songs.  The school year ended.

I spent another year teaching Confirmation the other 6 songs in the cycle, and taking another trip to New York to record the band for the rest of the project (Tiny & Nate).  Confirmation finished recording the songs in the Spring of 2003.  The album was recorded!

Yes, the Jesus is the Man Project became an expensive and time-consuming hobby that was doomed to not be finished.  If that weren't enough of an obstacle - life happened.

In the Fall of 2003, my wife became pregnant.  (got some editing done at home)
In the Spring of 2004, my daughter was born.   (did some overdubs on keyboards at church)
In the Summer of 2004, my wife became very ill and had several surgeries.
In the Winter of 2006, she was back in the hospital - more surgeries. (Keith did some overdubs in Chicago and mailed a hard drive of audio to me)
In the Summer of 2007, I admitted to God, my wife, and myself that I had a food addiction.  (worked on guitar overdubs with Kevin in my office at school)
In the Summer of 2008, I celebrated 140 lbs. of weight loss, and living insulin free as a diabetic.
In the Winter of 2008, I met Diane Paulus, artistic director of the A.R.T.
In the Summer of 2009, I became the music director and choir coordinator for an A.R.T. show.
In the Spring of 2010, I had a revelation that I didn't want to sit still on my music anymore.
In the Summer of 2011, I became the rehearsal pianist for Broadway's Porgy & Bess.
In the Summer of 2012, I used the money from the Broadway show to go back into the studio, Nate & Marcus did some final percussion and keyboard overdubs in Connecticut,  and I finished the mixing and mastering of the Jesus is the Man Project at Sanctum Sound with David Moorhead and Peerless Mastering with Jeff Lipton.

I found a venue (Vineyard Church), I created a website (www.jesusistheman.net), and I spread the message to all of the people I've met along the journey that it was finally happening, hoping some of them might join me for this last run around the track.

No, not wizardry or sorcery or slight of hand or illusion. Go look up "magic" in the dictionary. It's described as "a quality that makes something seem removed from everyday life, especially in a way that gives delight."

The best parts of the Jesus is the Man Project were the people involved.  Those that gave their time, energy, and talents to lifting up these songs in order to lift up something, someone higher.  They are beautiful, and they made the magic happened.

I was just the Master of Ceremonies.  And as your humble M.C., 18 years after writing the first song and almost 10 years since the beginning of the recording, I end this longest of TAOF blog posts by saying . . .

Thank you.  Thank you all.  The vision is complete.  My work was not in vain.  I am not ashamed.  I am no longer insecure.  You will hear me singing with pride and corniness, "Yes I know that Jesus is the way."  He IS the man.  And I am still,

Posted by DavidColeman at 9:30 PM