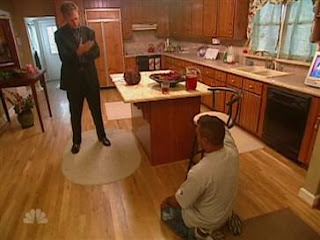 Hello everyone out there in Funkyland. Sorry I've been unable to write these last few weeks. We've been on Spring Break, and as you know I can only keep this site alive when I'm deep in the trenches of Study Hall. Well, here we are again.

Like you, over the last few weeks I found myself contemplating the horrors of reality TV. While I receive several guilty pleasures from some reality shows, it does not change the fact that some of them out there are also evil. One of the most seemingly noble reality shows actually is not so noble. I'm speaking of NBC Dateline's "To Catch a Predator."

Now, if you watch the show, slow down. I'm not advocating child molesting. But for those of you who don't know, here's the premise.

In conjuction with local police authorities, Dateline NBC sets up decoys in online chat rooms posing as 13-14 year old boys and girls. Of course, conversations with other web users ensue and they have little trouble finding someone engaging the decoys in sexual conversations. After trust is formed, an in-person meeting is arranged. The man walks into the house which is rigged with hidden cameras, and instead of meeting the teenager, out walks the show's host, Chris Hansen, in a suit, who proceeds to have an interview with the predator. He mockingly asks questions like "What are you doing here?" as if they both don't know, and this is supposed to be the climax of the show. We watch as this person squirms in their seat as the reality sets in that they're busted. Some are sorry, some are in denial, some are scared out their minds. When Chris Hansen is done with them, they leave the house, and are met with at least 5 police officers that scream for them to get on their knees or their faces. They are handcuffed and taken to the police headquarters.

If you think they haven't broken laws, you're wrong. There are laws on the books in many states that an adult's "intent" alone to have sexual relations with a minor is illegal. The e-mail solicitaions are illegal, and showing up at the house is illegal. These guys get what's coming to them. So you say, what's my beef with this? Why do I have a problem with taking child predators off the street and this television medium being used as a deterrent to other current and future predators?

My first problem is that the punishment should fit the crime. Yes, set-up stings. Yes, entrap them. Yes, arrest them. Yes, put them in jail and get them help. But when you broadcast their face on national TV, you've done more than make them responsible for their crime. The predators ARE responsible for their possible loss of a marriage, career, and respect. Those things are personal. But now, it's everyone's business. And while it may be my business to know who registered sex offenders are, why broadcast the person on TV as they fall to their lowest point? to be arrested? to cry for mercy? to beg forgiveness? Who are we to judge these people? You could argue that they did this to themselves, but how many of you had millions of people watching you make mistakes in your life? This is their struggle - albeit a horrible one - but a struggle nonetheless. And NBC is cashing in on our disgust for their weakness. I want them off the streets. I just don't think they deserve the public circus that surrounds their arrest. Do we do this to murderers? Catholic priests? politicians? embezzlers? adulterers (well, Cheaters, Inc. - I guess we do)? Anyway, you get my point. Their faces are now synonomous with their weakness, and despite the fact that there is good in everyone, these people have been branded with a scarlet "P" for life. Anything good they ever did or will do will have little significance. Why can't you have the same show with the predator's face blurred? We'll get the interview and the effect, and they won't have to pay twice for their crime.

My second problem is what's with the SWAT team that arrests these guys? I mean does it take five cops to take down one scared-out-of-mind-just-want-to-go-home-as-fast-possible sex predator? Of course this is to scare the crap out of these men, and it's effective. But, I think if Chris Hansen (not the most buff guy) were to say "you're under arrest" these guys would let HIM handcuff them. They're that scared.

My third problem is - is this a deterrent? Is this a new epidemic - men interested in young boys and girls? Sorry, but if you have this weakness, "To Catch a Predator" ain't changing that. You've got a deep-seeded problem that only time, therapy, and Jesus can heal. That's like saying "Cops" deters drug dealers and domestic abuse. Are you kidding? They need those things so they'll have a show! It's obviously not going away. Men have been interested in young girls and boys for millenia. It's an unglamorus part of the human condition.

And last, notice the set-up is surrounding teenagers. If we have to do a show about this, do one about sickos who molest little children like 7 and under. I don't think it's rocket science to figure out how men are tricked into believing 13 or 14 year old girls or boys want to let them have sex. The fact is, teenagers and even younger kids are sexually active. These predators were once kids too. They know. If you're older than 13 or 14, you know too. Kids are engaged in sex very early these days.

Anyway, I'm throwing in a joke to yet another serious blog by Funkyman. Please don't stop reading, I've got plenty-o-jokes.