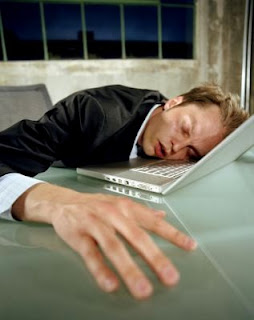 You probably thought I was going to blog about Don Imus. Well, for my thoughts on that, refer to my open letter to Michael Richards. Right now, I'm busy watching my favorite talk show . . .

Funkyman: I stay up so late. No, I mean really late.

You: How late DO you stay up?

Funkyman: We'll be back after these words from our sponsor: The Adventures of Funkyman

How did this happen to me? I personaly think it's genetic. Yeah, Mom and Dad, it's you, not me. Seriously, though, I stay up late because it has become the ONLY time where I can think clearly about all of my responsibilities as a father, a husband, a teacher, a director, a composer, and a musician. So this is my plight. I work late, but I'm working on curbing it. Please pray for me.

However, while you're praying, enjoy these anecdotes about my late night adventures.

THE FIRST ALL-NIGHTER
Now, I do actually sleep everyday. I rarely pull all-nighters. The body was not designed to handle this kind of abuse well. But, the first time I actually did it was in 1986, during the summer of my Junior year of high school, at the Tanglewood Music Center summer program. Me and some friends were talking and laughing, and it got to be so late that we thought it would be cool to talk and laugh until the sun came up. So, we set up our chairs outside and talked the night away. Sure enough, morning came, and I couldn't believe how great I felt. HA! Staying up all night is easy! HA-HA! Take that, brain! Take that, body! I am the master of my domain! I feel AWESOME!

I was amazed at how I felt no fatigue at all! Could it be I don't actually need sleep? Could it be I have an untapped super power to withstand the need for rest? Am I a mutant? an X-man? This is so cool! Now let's see, I have a piano master class at 1 p.m. so let me go grab my music. Where is it? Oh it's resting on the floor underneath my bed. I'll just climb on the bed and reach under to get it . . .

Picture a twin bed with a 15 year old boy lying on his stomach with the top half of his body hanging off the foot of the bed like a cadaver. Many people had no problem picturing this because I left my dorm room door wide open because, hey, I was just getting my music, right? No sooner had I crawled on that bed did my body take over and I passed out. I woke up 5 hours later in that same position. I missed my class, and now my dorm was laughing and had pictures of my body like it was a crime scene or something.

That was the day I realized I was not an X-man.

Funkyman: And we're back! Our next guest is someone you all know. You! Let's bring you out.

Funkyman: Details, details. Anyway, I hope you liked that story. I have another that centers around moving. Can you please tell me, what in the world is worse than MOVING? Right?

Funkyman: Well on that note, another word from our sponsor. Hey you, lighten up a little for my audience.


SECURITY
One of my favorite late night stories deals with moving. What is worse in this world than moving? I digress. We live on campus at a boarding school, and we were moving to a new place. So, my brother Anthony was over one night to help me move literally two houses away on the same street. We were busy packing while he was charged with transporting boxes by foot to and from the new house. Picture this, it was very late, we live in Wellesley, we're black, we're walking the streets carrying boxes - it looks a little suspect. We have campus police, and during one of my brother's walks, the police drove up behind him, wanting to inquire about what was going on. So what does my brother do?

He ran! Top speed trying to get back to my house. The cops caught up with him, "Hey, hey, hey! We just want to know what's going on?" My brother then informed them he was my brother and that we were moving, and the incident was over. When he told me what happened, I have never laughed so hard in my life. Why did you run, dude? Hilarious.

That was day my brother realized he was not an X-man.

Anthony: It wasn't funny if you were there. Hey, how'd I get on this show?

Funkyman: This is my world. Welcome.

Funkyman: In a minute. First, let's hear one more late night story. This one involves our Dad.

At about 3 a.m., our father decided to wake up and walk through the house and of course noticed that neither of us were in our beds. We were in the office. Upset because of the lateness of the hour, my father figures now would be a good time to give us a lecture on procrastination. He storms into the room . . .

Wisdom and I patiently stared at our father and waited for him to finish. He then left the room. We both looked at each other and then . . .

That was the day our father realized we had matured beyond reprimands. That's a scary day for a parent, and our father WAS an X-man, so you can only imagine. What was his power you ask? He has the ability to forget that he's said the same thing to you 37 times before. It's uncanny. (get it?)


Funkyman: Well that's our show for tonight. Tomorrow night we have you, you, and this just in . . . Don Imus.