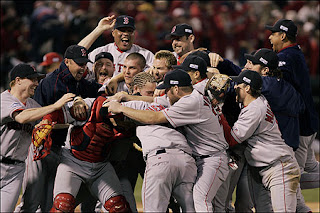 Look at this picture. DId you ever wonder why the catcher is horizontal? I know why. He's a sacrifice.

I've never been a huge sports fan. And yet, I'm surrounded by them daily. I'm not talking about your average sports fans. Yes, that's right - the ultimate fans - Boston fans.

Why shouldn't Boston be the ultimate town for sports fans? Look at the record.

Bobby Orr and the Bruins - Hello?
Larry Bird and the Celtics - Hello?
3 in 4 Superbowl Champion Patriots - Hello?
And of course, there are no fans like those of the Boston Red Sox.

Remember when you were in school and you personally knew the guys on the football team? the basketball team? the baseball team? When they lost a game, you could pat them on the back and encourage them. And when they won - you were so proud that they not only represented you and your school, but you actually took classes with them, knew them when they were kids and couldn't play a lick, heard how they got in trouble at home, saw them at prom, etc. There was a connection. Even if you didn't know them personally, you could at least say - "Yeah, I go to that school. That's my team."

How does this work in professional sports? When sports become a business, how do we make the personal connection to athletes who will be traded at a moment's notice for a better deal? When whoever has the most money can make the best team?

This is why I've never gotten into professional sports. I can relate to school sports for the reasons above. Winning can be fun and uplifting. But in this town, it's downright frightening. This is a quote from WBALTV.Com describing the Boston Red Sox winning the American League Championship in 2004.

"Rowdy crowds overturned cars, threw barrels and climbed light poles, trees, cars and walls. Sixteen people were injured during the post-game rioting, some of them after trying to scale the Green Monster wall at Fenway Park and falling off. About 2:30 a.m., police closed Lansdowne Street after an confrontation between police and fans. One fan, a female college student, was reported critically injured by police trying to break up the crowd. Later it was reported, she died from the injuries."


This is from CNN.com after the New England Patriots won their 2nd Superbowl.

"One recent rampage broke out in Boston when the New England Patriots beat the Carolina Panthers in Super Bowl XXXVIII. Hundreds of college students took to city streets after the thrilling victory and set fires, broke windows and overturned cars. One person was killed."


Man, why is it everytime a Boston team wins, blood must be shed on the altar for the gods of Athletics?

(cue Death Metal music)
"YES! I HAVE GIVEN YOU VICTORY! DRINK YOUR WINE! OFFER ME YOUR SACRIFICE! DO IT! NO, NOT HIM. GET THE WEAK ONE. THE STUDENT! YES! YEEESSS!!!! HA HA HA HA HA!"

Hey, I was excited when the Sox won the World Series. I own Boston Red Sox T-shirts and a couple of Patriots ones too. I'm not hating. I just have no intention of showing up to the Garden, Fenway Park, or Gillette Stadium when we win the next one. These fans are way serious.

Anyway, on a side note - May 12, 2007 - me and my choral group will be singing the National Anthem at Fenway Park before the Red Sox vs. Orioles games. I totally plan to leave before the 9th inning just in case.

When is your choral group singing? We need dates. :)

I don't care all that much for sports in this town. Nevertheless, AG will give away something about herself--Bobby Orr was a good guy. He wasn't like the others with the beer, condoms and girl in his hospital room when the sports doc went to see him. He was a class act in many ways. At least from the point of medicine.