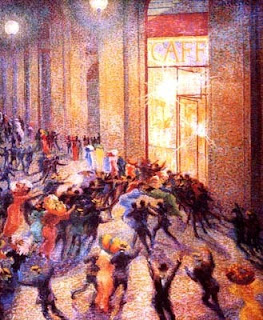 As a parent, you have to search around a lot of places in order to find a good deal. People don't believe my wife and I when we tell them our daughter's GAP jeans cost $5 each. It's because we were vigilant shoppers that we found that deal. Patience and persistence really pay off.

However, I do draw the line somewhere - Black Friday, or as I like to call it Dawn of the Bargain Hunter Crackheads.

Wanna know what evil lurks in the heart of man? Come with Funkyman and I'll show you.

On Friday, November 25, 2005 I woke up to my alarm at 4:00 a.m. With my belly still full from last night's Thanksgiving dinner, I was up and out on the search for a $99 digital camera to replace the one we already had. Target was having a sale, just like everyone else - Sears, Wal-Mart, K-Mart, JC Penney, Best Buy, etc. Since they opened at 5 a.m., I would get the early-bird start and get there as they opened. Right?

As I drove down Route 22, a mecca of restaurants, department stores, and malls, I began to see long lines of people wrapped around buildings. There's really no telling how long people had been there in order to secure a place first in those lines. I started thinking, "If there's a line like that at Bed, Bath and Beyond Stupidity, then what's it going to be like at Target?!" My fears were valid.

As I pulled into the lot of Target, I suddenly realized that at 5:05 a.m. there were no parking spaces. I drove around for a while to find one, and began my long walk to the door. As I got closer to the building, I could hear the murmur of activity growing louder and louder, like maggots feasting on raw meat (I actually know what that sounds like. Another story for another blog). And then, I walked through the door.

Mayhem. Absolute Bedlam. People running down aisles, people already 30-40 deep in lines at the cash register. As I made my way to the electronics section, I saw that it was too late. I looked for my $99 camera and of course didn't see it anywhere. I asked a salesperson and they just laughed. They LAUGHED. "Oh, those went real quick." REAL QUICK? You've been open for 5 MINUTES! Why would you advertise a great deal like that and not have enough stock to . . .

Duh. It suddenly hit me. They say that if you can't see who the sucker is in a con, it's you. I had been had. I had succombed to the will of marketing and commercialism. They got me up at 4 a.m. looking for that too-good-to-be-true deal. Well, fool me once . . . As I headed back outside, I heard two customers talking. "This isn't too bad. At Wal-Mart a few minutes ago a fight broke out." The other customer replied, "Yeah, I heard about that. My daughter's there. That's crazy."
I promised myself that never again will I leave my house on Black Friday. As a matter of fact, I make it a point not to go to the mall on weekends, especially this time of year because it's not far from that experience.

People aren't inherently evil, but ideas and institutions can be. Do you know what Wal-Mart's slogan this season is? "The more you save, the more Christmas you can give." The more Christmas you can give? So GIVING Christmas means money or gifts? I thought giving money or gifts was how you could CELEBRATE Christmas. I can't GIVE Christmas anymore than I can take it away. Christmas is what it is, and my gifts and the money I save don't determine how great or small it is. It's sad, it's really sad.

I know that this issue will not simply go away, but let it be known - if you celebrate a holiday, enjoy life. Don't get caught up in the nonsense, whatever it is.

So, believe me when I say this, and I really mean it. MERRY CHRISTMAS! I love you all.