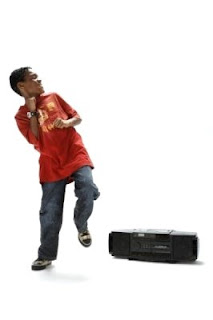 Hello Funky-philes, I apologize for not writing sooner. I have been buried alive in concerts, school work, and a sick family. During this time, I did consider writing about these mundane aspects of life, but I couldn't find a way to make it funky. So, it suddenly hit me. What's the one thing that I rarely write about that I have a lot of thought about? Yes, music. I think I've blogged once about music I like. Well today starts a new era. For the next several weeks, The Adventures of Funkyman will discuss his passion and vocation. I will start today with my 10 favorite songs of all time.

Let me begin by saying that I don't have favorite songs anymore. The time in my life has passed that a song sticks out as a "favorite." This list of 10 is very difficult to compile because it draws from the era when I loved a song so much that I searched high and low for the artist, album, and eventual purchase of the cassette (no CD's back then). This era I refer to is - the 80's. These songs made me happy to be alive and the criteria for being on the list is that they transport me back to the time I fell in love with them. I honestly feel like a kid again. Hopefully you will appreciate that I, like you, love thousands of songs. These however made me savor life more and better than the rest. Here they are. Judge as you may.

"Uptown Girl" by Billy Joel - Haters can hate but I still think this is his catchiest, most sing-a-long-able, most make-you-want-to-live-in-the-50's, most want-to-be-in-love song ever. I LOVE THIS SONG!

"Right On Track" by The Breakfast Club - You're saying, "who?" The Breakfast Club (no affiliation with the movie) was once the band for Madonna. They did their own album and had a hit with this song. This is the song that made me fall in love with the iv-m7 chord. I didn't know what that was at the time, but now I still revel in its magic and have used it several times in songs myself. Ultra funky track that still makes me wish I wrote this song.

"On the Dark Side" by John Cafferty & the Beaver Brown Band - O.K. can I tell you how hard it was to find this song in 1984? This was the big hit from the soundtrack to the movie "Eddie and the Cruisers." It didn't do so hot in the theaters, but when it hit HBO, it blow-up-uated. I loved this song so much, and so did a lot of other people, because everywhere I went it was sold out. My family and I were driving cross-country from Memphis to L.A. (summer olympics) and every record store in every city in every state we stopped in was sold out of this soundtrack. I don't even remember the name of the little town in New Mexico that I found that had a copy. I have rarely been that happy. This song makes me remember that trip like it was yesterday. Just a catchy, simple, perfect song.

"You Make My Dreams Come True" by Daryl Hall and John Oates - I loved this song so much, I bought every one of their albums regardless of whether it had good songs on it or not. This song starts with a little funky clav riff that did and still does make me want to jam on the keyboards. Too good. Too good.

"My Sharona" by The Knack - You know the song. You know you love it. The epitome of the one-hit wonder. The greatest catchy song of all time.

"We Close Our Eyes" by Go West - Brilliant synth pop by good song writers, musicians, and singers that never quite got their due. You may be more familiar with their hit "King of Wishful Thinking." But this song made me marvel in the layers of synth sound these guys created. If you ever get a chance, check it out. There's something new happening every few seconds and the song is like a brick house its so solid. I LOVE THIS SONG!

"Into the Groove" by Madonna - Jellybean Benitez is the songwriter/producer of many of Madonna's hits and other 80's stars. Just like "Right on Track," this synth-bass chord progression made me fall in love. It uses the same iv-m7 chord, which I didn't realize at the time. There really are only so many magic tricks you can do with music, but this is a great one. So good.

"Straight Up" by Paula Abdul - I had a mild obsession with Paula Abdul in 1988, like most other teenage boys. Deep down I knew she couldn't sing a lick. I was enamored by her beauty and her dance videos. Sue me. However, this song was amazing, regardless of the artist. The songwriter won songwriter of the year from ASCAP, a prominent society of musicians. A great use of percussion, rock guitar, and synth. A great pop song. A great achievement.

"Night of the Living Baseheads" by Public Enemy - It took me a little while to love Public Enemy. While their albums were dropping, I couldn't get past the noise element of their compositions. However, that all changed in 1991 when they did an album called "Apocalypse '91." Suddenly the world was opened up to me in a new way. I realized the genius of Chuck D, probably my favorite rapper of all time. But better than that, I was able to go back and re-experience their catalog of albums. This particular song is from their highest-rated album "It Takes a Nation of Millions to Hold Us Back." This anti-drug song starts out with a quote from Farrakhan about how black people lost their identity being brought here from Africa. Then all of sudden, Chuck D screams "HERE IT IS! BAMM!!! AND YOU SAY G-- DAMN, THIS IS A DOPE JAM!!!" The beat, bass, and noise kick in so strong that it makes you wake up even if you're already awake. It's amazing, and it still works. Check it out.

"Mr. Roboto" by Styx - "Secret secret, I've got a secret" Come on haters. This was amazingly catchy. Yes it was campy, too. But this song and album made Styx the superstars they deserved to be. Say what you what about corporate rock sell-outs. These guys were/are amazing musicians and this concept album had everything the 80's needed. Besides, name one other number one hit that has Japanese phrases, robot references, and screams "I'm Kilroy!." Enough said.

O.K. enough of the 80's. Like a said before, there are literally thousands of songs from this era that I love ("Another One Bites the Dust," "Valerie," "I'm Still Standing") but this list of great pop songs make me continue to want to be a songwriter myself. Just the idea of writing a song that gives anyone half the joy that I get as a listener gives me inspiration to keep doing better.

And we should all be so lucky to have that in our lives.