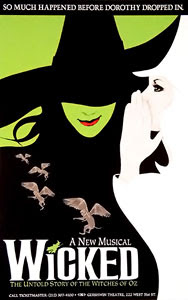 I saw Wicked on Sunday. It was amazing. But more amazing than the show itself was what I discovered there. Sit back, and I'll tell you a funky-story.

Funkyman readers may recall that I love the theater. I wrote about it here. I have had a passion for it since I was a child and one of my dream jobs was to one day be a musician in the pit orchestra of a Broadway show. Not the conductor, just the piano guy. I was in love with A Chorus Line, and I really wanted to make that show the one I worked for.

However, during my freshman year of college, A Chorus Line was taken off broadway. What happens to a dream deferred?

Anyway, as life took me different places, I ended up a choir director/teacher in the independent school system here in New England. And in 1996 I met a young man who at the time was in 7th grade. His name was William Van Dyke. He had a quick sense of humor. (Hey, I have a quick sense of humor.) His father was a dentist. (Hey, my dad's a dentist, too!) He played the piano. (Hey, I rock a piano!) And he had a similar dream of being a professional musician. (Hey that's my dream!)

We hit it off almost immediately and were pretty close. His parents and I became friends, and we've stayed in touch beyond his years in high school and finishing college. Last I had heard, he was playing keyboard in a touring company of Wicked. I think you can see what's coming.

So, I'm sitting there Sunday night during intermission, reading through the Playbill to see what songs were in Act 2, when I happened to glance at the Orchestra musicians. There it was: Keyboard - Will Van Dyke.

I ran to the pit orchestra, looked down, and said "Hey, is Will Van Dyke down there?" They said, "Yeah." I said, "Tell him Mr. Coleman is here." They said, "Hey Will, Mr. Coleman is here." I hear a "WHAT?" and there he came running from the back. I hadn't seen him in a couple of years, and I had honestly not put two and two together that THIS touring company of Wicked was his.

I began to tear up because seeing him down there at this show confirmed that he was living my dream, and because I was his teacher/mentor/friend, I felt like I was getting to do it too. That is the gift of teaching that they can't explain to you when you apply for the job.

Well, we're getting together tomorrow to have lunch and hang out and catch up. I can't wait to tell him how proud I am of him, and how he's touched my life by doing something I've always wanted to do. I'm not sad at all that it wasn't me, and it's not a crummy circumstance that my student is doing what I wanted.

Awesome story! I haven't been teaching long enough to have a wicked tale of my own, but I remember attending the Carney Sandoe meat market a few years back and running into some of my high school teachers. The look of pride and joy on their faces when they saw me there, pursuing a career in education, is one that I will always remember.

On the topic of Wicked, I saw it a few weekend ago... what a brilliant show. I was not so impressed with the music and the performances as I was with the lighting and the set design. I have never seen that kind of creativity and attention to the presentation of a show. WOW!