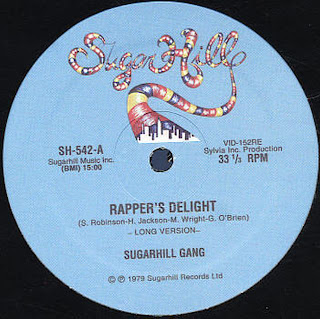 Hello Funkinsians!
So many things to write about, but no time! I'm SO busy this month. Let's see, since I last blogged:

Seriously, April is the busiest month of the year for Funkyman, and thank God it's almost over.

I know you're asking yourself - "Funkyman, how do you relax and wind down from all of this work?" Well I'm glad you asked. The answer of course is - ROCK and RAP - and since I've already blogged about ROCK, you know what time it is.

Of all the kinds of music I've blogged about, this one is the hardest because there are so many wildly different opinions about this genre. Let me start by saying, I'm a child of the 70's, and the first record I ever owned was the Sugar Hill Gang. "Rapper's Delight" was a huge influence on me, and since it was probably my imprint, I love rap songs that are funky and make you feel good about life. About 10 years later, when NWA was singing "Gangsta Gangsta," I felt as if I was already too old to enjoy this music. And it makes complete sense that whoever was 7 or 8 at the time when that song came out was also imprinted - scary tales about life in the inner city, a negative attitude towards women and authority, and a glorification of alcohol and drugs became the definition of "good" rap music.

Now don't get me wrong, "Gangsta Gangsta" is genius, if for the music production by Dr. Dre alone, but also because one of most charismatic and successful rappers ever wrote it - Ice Cube. I grew to love this song, but what separated me from my young counterparts is that I was an adult, and I could appreciate it for its merits, but also criticize it for its problems - a maturity sorely missing in today's hip-hop.

Sugar Hill Gang inspired a generation of New York area rappers who took party music and began to rap about life - not in the glorification of crime - but rather the insight of a poet looking at his/her environment, whether it be socio-economic, interpersonal, or existentialist. These are what we call "Conscious" rappers, and these guys are my heroes. They are the antidote to the songs that glorify the negative images so easily portrayed and often enjoyed by all people. And thus a war is raging.

10. Ghostface Killa - Probably not considered in the highest order when he first hit the scene in 1993 with Wu Tang Clan, especially since he was one of like 11 rappers in this group. Ol' Dirty Bastard and Method Man were more outlandish characters. However, time has proven that pound for pound, not one of the rappers in that group have been as prolific or as consistently lyrically impressive as Ghostface Killa. When this guy freestyles, it sounds better than most people's written rhymes. He has a gift for verbally painting a picture. I highly recommend "Special Delivery ( Bad Boy remix)." Not his greatest song, but an amazing display of how he MAKES a song good.

9. Aesop Rock - The only white rapper on my list is probably the most complex lyricist of the bunch. It would take several listenings to some of his songs to unlock the hidden meanings of his lyrics. He is in a word - ridiculous. I highly recommend "Daylight." It will change your life.

8. Black Thought - The frontman for The Roots is what hip-hop is all about. He can rap about anything and make it sound important, even if it's not - but it usually is. The reason he sounds this way is that he has one of the best voices in rap. You just want to listen forever. He is excellent with metaphors and social commentary. He's the kind of rapper who makes you think and makes you wonder what he's thinking. I highly recommend any of the Roots' albums, but definitely "Things Fall Apart" and the track "The Next Movement." Also, special mention that The Roots are a band - not a DJ with turntables. This is not better, just different - and GOOD.

7. Keith Murray - I love Keith Murray for two reasons - first, he uses his real name, a trait you will find rare in hip-hop, and second, he has one of the best vocabularies in rap and can still FLOW. With an edgy sound to his voice, Keith Murray is full of braggadocio, but always backs it up. He is best when paired with Erick Sermon and Redman, better known as Def Squad. I highly recommend "Full Cooperation" or "Dangerous Ground." I'll refund your money if you don't like.

6. Method Man - Also of the Wu Tang Clan fame, Method Man is by far the most famous and successful member of this group. This is mostly due to his entertaining and forever clever lyrics and delivery which truly are original. Simply put, everytime I hear him rap, I smile. That's a great gift. I highly recommend "Method Man" or "Bring the Pain."

5. Talib Kweli - Nobody doing rap right now is better than Talib. He is true to himself and his music, and if you like to think, he's your man. Highly spiritual and insightful, Talib's lyrics are what modern hip-hop needs the most, and he is one of the leaders of "real" hip-hop. I highly recommend "Get By" or "K.O.S. (Self-Determination)."

4. Mos Def - One of the most gifted artists alive, much less rappers, Mos Def is an amazing poet, rapper, singer, and actor. You will find his album, Black on Both Sides, in my top ten albums of all time. He represents everything good about hip-hop - the fun stuff and the serious. He is undeniable. I highly recommend "Hip Hop" from that album or "Definition" from the group Blackstar - Talib Kweli and Mos Def together on the same album. Yes!

3. Rakim - If you search the web, you will find Rakim at the top of the lists of greatest MC's of all time. Rakim is a lyricist's lyricist. He was probably the first rapper to make every rapper stop in his/her tracks to analyze how he composed a rhyme. Rakim was and is a genius wordsmith, and he also is known for introducing James Brown to a generation of kids who otherwise would not have payed attention. Thank you Rakim and thank you hip-hop. I highly recommend "Juice (Know the Ledge)" or "I Ain't No Joke."

2. Chuck D - The frontman for Public Enemy has long been my favorite rapper. His delivery is so original that NO ONE sounds like him. You can hear him a mile away. And all of his lyrics are social-conscious. His songs transcend music and become political trees ripe with information fruit and food for thought. Coupled with the groundbreaking DJ/producer Terminator X and the ultimate court jester Flavor Flav, Chuck D was the straight man in a crazy musical revolution ahead of its time. He was probably one of the oldest rappers in the game at the time, and his maturity was crystal clear. He definitely had an influence on my life. I recommend "Shut 'Em Down" or "Fight the Power."

1. KRS-One - Ah, but only one rapper can be number one. The Blastmaster, Chris, Boogie Down Productions frontman - whatever you want to call him, KRS-One was and is the most influential rapper alive, and as far as hip-hop is concerned, is the Prime Minister. If you don't have BDP's first album, Criminal Minded, you missed the birth of hip-hop. KRS-One is one of the few rappers who was around at the beginning of hip-hop, and still today is guest appearing on several records - and he still sounds original and amazing. He stresses the importance of education and not settling for the status quo. I highly recommend "My Philosophy" or "Black Cop."

Peace and love to everyone, which is what Hip Hop is supposed to be about.

i'm surprised eminem didnt get an honourable mention, granted his 2nd LP is your #2 favourite album of all time.

and how about common? you mention 2 other soulquarians but not the one who was recently at tufts. how does he size up on your list?

hope you and the fam are doing well :-)

Astute observations, true. However, as difficult as it is to compile these lists, I am thinking overall greatness, and while Eminem was the rapper on my 2nd favorite album, he didn't do it alone. As an album, a lot of success goes to Dr. Dre and the other producers (and guests) that make that album great. And while that is #2 on my list of albums, no other Eminem album has come close, in my opinion. That's not overall greatness as an artist, in my book. One of the best rappers? Sure, but top ten? Not in my book.

For instance, True Romance and Pump Up the Volume are two of my favorite movies, but Christian Slater would not be caught dead in a top ten list of the greatest actors of all time.

As for Common, true he is a fabulous ambassador for Hip Hop. He also has composed some of my favorite rhymes. However, I am not a huge fan of his voice, and I have never gotten lost in one of his albums. Sorry, I'm not a hater. He just doesn't always do it for me. He wouldn't make my top 20. I know a lot of Common lovers will hate me for that, but it's nothing personal. I love who he is and what he stands for. God bless him. My favorite guest appearance of his is on Kanye West's "Get 'Em High." He truly is a genius. Just not my favorite.