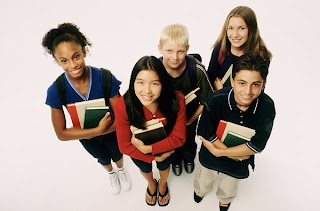 "A Michigan elementary school is accused of violating a ban on racial preference in public schools by allowing 30 African-American students to take a field trip to hear from a black rocket scientist without inviting other students. School officials said they hoped the trip would inspire the African-American group to consider science and engineering as a career. The 30 students are members of the Lunch Bunch, a peer-support group set up to help students struggling academically. It was created to help improve African-American students, but is open to any students, although only black students currently are members."

What this article does not include is that when the students returned to school they were booed by the other students because they were allowed eat lunch out and have a field trip, followed by the principal hearing the boos and coming in immediately to have a passionate, charged discussion about race in America. Parents of the left-behind children began to call and write the school outraged over their kids being left behind.

There are only two points Funkyman would like to make.

Point #1 - If you were to substitute the word "Caucasian" for "African-American" or "black" in that story, right now there would be literally rioting in the streets. If students of color got left behind at school one day because the white students went on a field trip to meet an astronaut, Al Sharpton would be on television 24 hours a day with coverage about how we need to wake up and see the evils of society on display in Michigan.

We wouldn't tolerate it. And we'd be right. So would Reverend Al.

This is why the kids booed their classmates, and why parents are in an uproar with the simple obvious question - "Why couldn't you have had the rocket scientist come to school so all the kids could meet him?" Hard to argue with that logic, but there is a second point.

Point #2 - Intention. Though poorly handled this field trip was, the heart of the decision was trying to address a larger problem of African American children not believing that science is a viable or worthwhile field to go into. By creating this trip, the principal tried to make a difference, and his hope was that some person of color would be inspired and see that it's possible to succeed. There is not room enough in this blog to explore the intracacies of why today's reactionary segregation by group is a direct result of the past's deliberate segregation based on prejudice. The "lunch bunch" was not trying to hurt others by their actions. To his credit, the principal did write a letter to the parents saying the situation was handled poorly.

The problem with the "intention" argument in this story is that in the very same letter, the princpal's apology was then followed by the statement that he thought it was ALL worth it when he saw the spark of inspiration in the eyes of the Lunch Bunch kids.


YOU'RE THE PRINCIPAL OF AN ENTIRE SCHOOL - INSPIRE ALL OF THE CHILDREN! - THERE ARE LATINO, ASIAN, CAUCASIAN, AND OTHER STUDENTS WHO ARE DEPRESSED, CONSIDERING DRUGS, ALCOHOL, AND DEATH, COMING FROM BROKEN HOMES, WITH LITTLE OR NO FAITH. BLACK KIDS ARE NOT THE ONLY UNDERPRIVILEGED ONES IN SCHOOL. HELP ALL OF US. THIS FIELD TRIP WAS A "FAIL." "IT WAS WORTH IT?!" WHAT GOOD IS THE INSPIRATION OF A FEW BLACK STUDENTS WHEN YOU'VE LEFT THE OTHERS BEHIND - LITERALLY?

Racism is very real, and reaction to its effects is what happened there in Michigan. However, we as black people have to be able to recognize our own mistakes. Despite our best intentions, our attempts to deal with the effects of racism can be just as bad as the problem itself. The Lunch Bunch is not a bad idea. The exclusionary field trip was.

Just not at lunch, right? Come on people.